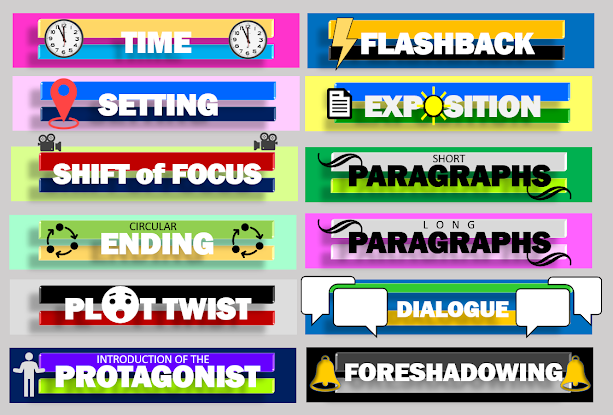 The structure question is one which can cause all sorts of problems for students approaching GCSE English.  So, there are a number of lessons on our VLE (Virtual Learning Environment) which cover what might come up in the exam – and the approach we take to it may surprise you.

However, of course, just like the language question, Paper 1 Question 3 (of the AQA exam) demands that you know some terminology so that you can describe the structure of a text while responding to the question.

Knowing how to take this terminology and put them together to make an exam response is, of course, something altogether different.  We will leave those lessons on the Virtual Learning Environment!

In the meantime, take a look at the structural features below.  They come with a set of graphics that may blind you!

This is where the time that the story takes place is established (year or month or season etc).  It often sets out where the story is set at the same time and is useful exposition.  Often mentioned “in passing”.
SETTING

This is where the place the story is set is established.
PROTAGONIST

The introduction of the main character - also known as the protagonist - can be an important structural element of a text.
EXPOSITION

This is where background information is placed in a text. This information can be about setting, character, prior events, historical context (and so on!) might be mentioned. Can be short but often lengthy.
SHIFT OF FOCUS

This shows events that happened before the current time frame.  They are often shown as memories and help a lot to explain background and motivation.
DIALOGUE

This is where conversation and speech may be used.  It is important that dialogue moves a story forward and can slow down the pace of a text to allow the reader to take in new info.
SHORT PARAGRAPHS

Short paragraphs often ‘zoom’ in to specific, important details in a text.  They can help to convey excitement, danger, or action – and also raise the emotional reaction.
LONG PARAGRAPHS

Long paragraphs (often called expository paragraphs) usually focus on setting, characters, and/or mood.  They tend to be descriptive and help set the overall tone of a story.
FORESHADOWING

This is something that happens in the story that is unexpected.  It gives a new view on the whole topic!
CIRCULAR ENDING

This is when the first word or line is repeated at the end of the story, showing that it has come “full circle”. Often there may be subtle changes to show narrative movement – that things have changed since the beginning.
This is, of course, not the only way to end a story - but it seems to be the most common in GCSE English texts.
If you are a student studying towards this exam, we have a way of answering this question which may makes things a lot easier for you - at least more straightforward.  Come and join us on the Virtual Learning Environment.
at October 11, 2020
Email ThisBlogThis!Share to TwitterShare to FacebookShare to Pinterest
Labels: GCSE English, Paper 1 Question 3, Structural Features, Structural Features for GCSE English Language, Structure in Texts