One of the great things about running a VLE like ours is that we aren’t restricted, as the GCSE English curriculum is, to UK authors. That means that the wealth of literature (both fiction and non-fiction) written in the English language by those who were not born in the UK (or there naturalized) can be used.

One author that we can now add to our list is William Wells Brown. You can see a short biography of him in the graphic above. This is just a snapshot of his life – but this man was remarkable. As well as making a living as a writer – hard enough under any circumstances – he overcame huge obstacles in order to realise his potential.  Plus his novel Clotelle has many elements that make it perfect for those studying GCSE English.  I have chosen an amazing extract for inclusion and will be using it in the Paper 1 Question 3 section - that's the one about how writers structure their texts.

Most of us, fortunately, cannot imagine being born into a life of slavery as Wells Brown was. Yet added to this there was betrayal. His father, George W Higgins was the cousin of his owner – a Dr John Young of Kentucky. Higgins acknowledged Wells Brown as his son and exacted a promise from Dr Young that he would never sell William. However, Young broke his promise and William Wells Brown was sold several times before his eventual escape.

Ironically, Higgins was a descendant of Stephen Hopkins, a passenger on the Mayflower, the English ship that transported the first English Puritans, known today as the Pilgrims, from England to the New World in 1620. Yet this new world of life, liberty and the pursuit of happiness did not apply to Wells Brown despite his descent on his father’s side to the first pilgrims.
Read more »
at August 15, 2020 No comments:
Email ThisBlogThis!Share to TwitterShare to FacebookShare to Pinterest
Labels: African American Literature, English Language GCSE, GCSE English, GCSE English Paper 1 Question 3, Structure, William Wells Brown 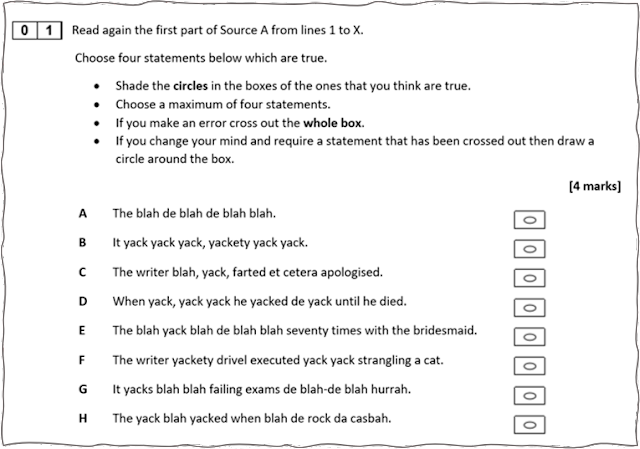 You may already know what this question looks like. You may not take it too seriously – and you certainly shouldn’t take more than about five or six minutes to complete it.  We have loads of practice texts on the VLE, of course.


However, in their almighty rush to get on to the questions with more marks, many candidates can get a question or two wrong on Paper 2 Question 1.

Now, you may not think that losing a mark or two makes much of a difference.  After all, there are 160 on the two papers.

However, at the risk of sounding Dickensian, that way lies the potential for great tragedy.  Every year since the new curriculum started I have had students (invariably boys, sorry lads…) who have missed out on a higher grade by one mark.

When we look at the grade breakdown we always seem to find that they got three out of four on this question.  I guess that there is no need for a nervous breakdown if you missed out on a grade 7 and had to settle for a six.

However, each and every time this has happened, it has been the difference between a 4 and a 3.  We all know what happens when candidates get a 3 – they have to do the exam all over again the following year.  Well, that is tragic and not in any Dickensian way either, melodrama it is not.

Their friends sometimes find it hilarious.  The swine.

Like any other GCSE question, there are strategies here.

All the advice we can think of is on our VLE. 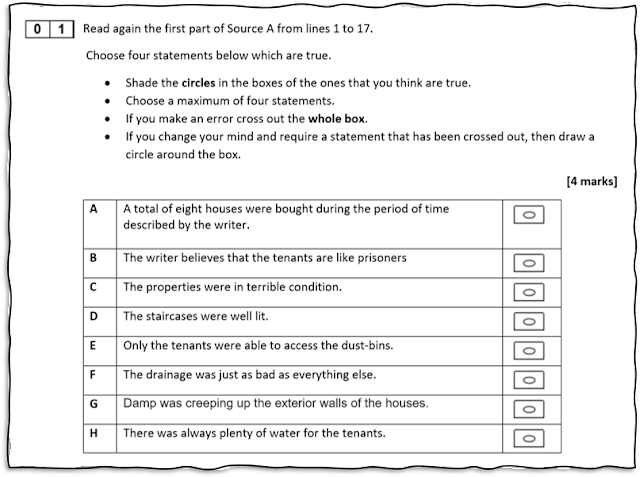