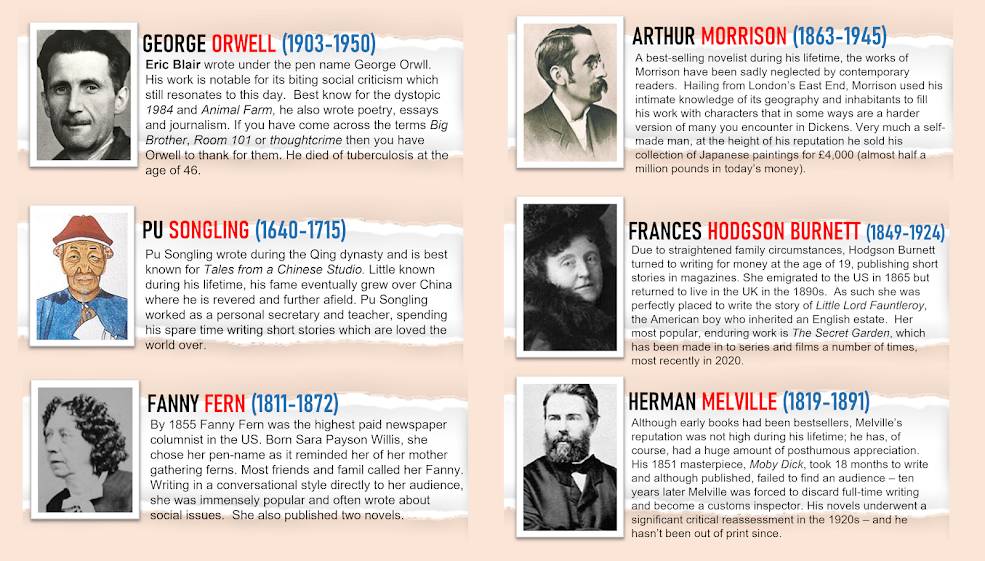 We’ve had a flurry of recent activity as we prepare for the launch of the Pass GCSE EnglishVirtual Learning Environment (VLE).

One of the great things about creating a VLE is the wealth of literature from which we can choose.  We’re not restricted, as the examiners are, by three centuries of literature so we can include writers like Pu Songling who was writing just a few decades after Shakespeare.  Of course, it’s in translation and it may be express cultural behaviour that is different to experience or expectation, but it introduces learners to literature that they may not have encountered before from civilisations they know little about.  It could spark an interest that leads to a lifetime of exploration.  Here’s a little about him.

Building a VLE has also given us an insight in to how hard finding the “right texts” is for this qualification. It isn’t simply a matter of pulling one off a shelf, it has to fit the assessment framework “just so”.  So, for example, for Paper 1 the text must contain enough detail for candidates to not only answer questions about structure and language (in separate questions) but also for a critical response to the text to be generated.  It isn’t every single beautiful piece of literature that fits the bill – finding extracts that “ticks all the boxes” is hard work.  No wonder that in the “proper” exams there is the occasional deft editing of the original for it to be something that candidates can respond to (especially in terms of length)!

It’s not just finding texts that have the right elements – they have to be in the right order, too.  So, for Paper 1, the first half of a text must have the elements in place for candidates to answer questions 1 and 2.  Question 3 is the structure of the whole piece, but the text must have elements of structure that are fairly straightforward to pinpoint, explain and comment upon. Question 4 is always the second half of the text so again must have enough elements to engender a critical response. Paper 2 is, if anything, worse!  Although contrasting attitudes are usually straightforward enough to find on any given subject, finding something else that both writers mention that can be used to form the summary needed for question 2 is an entirely different kettle of fish!

We have managed to find some authors who “tick all the boxes” but it has meant a great deal of reading (which isn’t detrimental in any way other than the time it takes!).  Perhaps it’s no surprise that we found something from Orwell, whose work is now in the public domain in the UK.  Under UK Copyright law, copyright expires 70 years from the end of the calendar year in which the author died.  As Orwell died (sadly, too young) in 1950, that means that his work went into the public domain in the UK in 2020.

As an aside, did you know that although Orwell’s work is out of copyright in the UK, if you want to photocopy a whole edition of, say, 1984, you still have to be wary of copyright constraints? That’s because typesetting, (the way that the work is presented on the page) is also subject to copyright.  This is set in the UK to 25 years from the end of the year in which the edition was first published So an edition of 1984 that was published in 1984 is fine to copy but one published in 2004 isn’t.

Copyright is something that we take seriously and that has meant that “old” texts predominate.  However, the idea that has taken root (particularly among students) that the older the text is then the more challenging is simply untrue.  Not everything before 1900 is unfathomably wordy! Take, for example, Fanny Fern, something of a celebrity journalist in her day – her beautiful, direct prose often seems like it was written yesterday.  Why we don’t hear more about her is beyond me.

As such, while we have been able to use authors that students are already familiar with, like Dickens, building the VLE has also given us the opportunity to rediscover writers who have been overlooked or even forgotten for no apparent reason.  Arthur Morrison is a case in point.

Of course, some were not recognized in their own lifetime, such as Herman Melville.   He isn’t exactly the Van Gogh of literature as he did enjoy some early success. However, he didn’t live long enough to see the renaissance of interest in his work that led to his inclusion in the pantheon of the greats of American literature. One must hope that he wasn’t too disillusioned with the lack of commendation his work received during his lifetime.  The startling piece we are using from the posthumously published Billy Budd shows what a remarkable writer he truly was.

Finally, we have a children’s author – Frances Hodgson Burnett.  Her prose brims over with beautiful descriptive passages which don’t go on too long because she kept her audience in mid!

So, these six now join the others on the VLE.  If you are a little concerned about the lack of ethnic diversity on display here, please be assured that we are making every effort we can to include prose work from as diverse a selection of writers as possible.  You will find blog posts here on some of those writers, including William Bells Brown, Mary E Jones Parrish and OttobahCuguano. Plus, our “Reading for Pleasure” section allows us to include links to modern short stories and other prose from a great selection of writers from all over the world.

at July 23, 2021
Email ThisBlogThis!Share to TwitterShare to FacebookShare to Pinterest