Natsume Sōseki and Mary Seacole extracts on our VLE 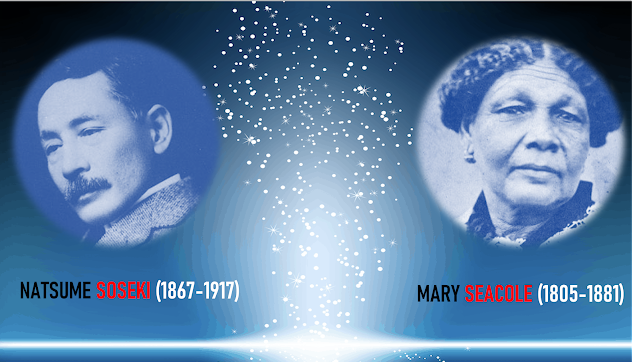 We’ve recently seen a flurry on the activity on the VLE and that means that new authors have been selected and included. Our two latest additions are Natsume Sōseki and Mary Seacole.
Soseki was born in 1967 a time when Japan was becoming both westernised and industrialised and his writing reflects these changes. As well as being a highly successful novelist he became the Professor of English Literature at Tokyo Imperial University. He remains immensely popular in Japan and there has been a global emergence of interest in his works in the 21st century.
Sōseki did spend some time in the UK. Arriving in 1900 he spent just over two years there on a government scholarship. Although this meant he could not afford to study at Cambridge, he went to UCL (University College London). Unfortunately, despite making some friends, he had a miserable time, writing later that “the two years I spent in London were the most unpleasant years in my life. Among English gentlemen I lived in misery, like a poor dog that had strayed among a pack of wolves”. Yet the years he spent in the UK helped him to consolidate his knowledge of English literature and to go on to acquire two prestigious roles teaching English Literature at Japanese universities.

His novels predicted many of the issues that we face today, which is perhaps why he is being “rediscovered” on a global scale outside of Japan (where he has remained consistently popular and one of the most widely-read novelists that the country has produced).
Yet the extract we have chosen is about a boy – the protagonist of his 1906 novel Botchan (Young Master). This is definitely the kind of boy you will have come across yourself – full of mischief and naughtiness. However, the reasons for his behaviour are fully implied when his less than perfect home life is revealed to the reader. It’s hugely compelling and full of humour but rather poignant at the same time. We think it’s a great text for anyone studying towards Paper 1 - Explorations in creative reading and writing.
You can read the full novel of Botchan here.
Mary Seacole, too, was never forgotten in her birth country of Jamaica but after her death her legacy was neglected in the UK, leading to a “rediscovery” in the 1970s. She is now on the British History National Curriculum.

A British-Jamaican nurse and businesswoman who set up the “British Hotel” behind the lines during the Crimean War. A hugely popular figure during her own lifetime, she published her autobiography in 1857 which was an immediate best-seller. In 2004 she was voted the “Greatest Black Briton” in a poll. In the UK, there is an annual prize to recognise and develop leadership in nurses named after her. Her autobiography reveals a resilient and humorous woman who although faced with many obstacles throughout her life, resolutely refused to be side-lined. We have chosen an extract about the theft of a pig which will, we hope, have you smiling as Mrs Seacole entertainingly recounts the tale of the stolen porker! As a slice of autobiographical non-fiction, its place is most definitely deserved in our Paper 2 (Writers’ Viewpoints and Perspectives) section.
You can read Mary Seacole’s autobiography here.
It is said that “travel broadens the mind” and by including these two authors we hope to transport our learners to places as they were so long ago and to experiences that should be shared and remembered. While we are committed to "decolonising the curriculum", of course the more “traditional” writers will always, too, have a place so you can expect Dickens and Orwell and many others on the VLE. Yet when familiar voices are joined by others that are different and unique in their own right, don’t you think it improves the whole choir?
at July 29, 2022