Quizzes for GCSE English – Are they Important? 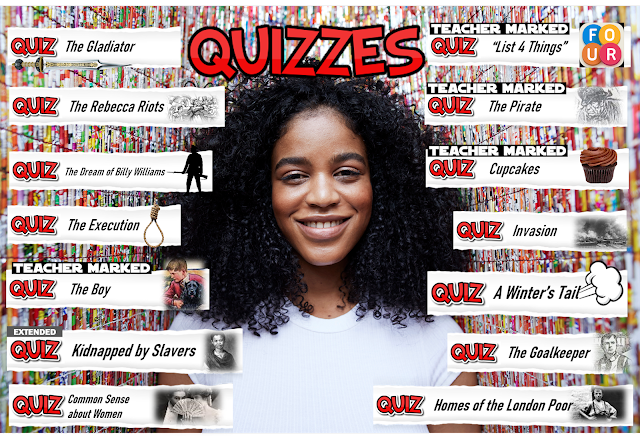 When a student walks into that big scary hall to take their GCSE English exam, they won’t have to do a single quiz – unless you count the “true or false” element of Paper 2 which is worth a measly four marks out of the 160 up for grabs across both exams.  So, why on earth use quizzes as a teaching and learning tool in preparation for this incredibly important pair of exams?

That’s a good question – and a simple one too.  My very simple answer would be “because they’re fun” and generally that’s where I would like the questioning to end.  I’ve never seen anything engage students more than a good quiz, especially on a platform like Kahoot. That’s the primary reason there are so many on the VLE, but more about that later.

Quizzes are flavour of the month right now – that’s for sure.  However, as long as the teaching wheel continues to go full circle every decade or two then the popularity and perceived use of quizzes will likely wax and wane accordingly.  Their star is most certainly in the ascendance at the moment – although they never really went away at all.

I love quizzes but doing a search for “quizzes for GCSE English” comes up with some strange results – most popular being the quizzes that various newspapers have put together to challenge their readership thus: “Could you pass GCSE English?”.  The quizzes then mostly have very little to do with what learners face in the exam.  Great.

You can go on Kahoot or Quizziz (both of which I adore) but sifting through the tsunami of choice you get on either platform can often be challenging when time is a factor.  I’m surely not the only teacher to have rapidly if somewhat guiltily pulled a quiz “off the shelf” only to discover half-way through that many of the “correct” answers are horribly, howlingly, hysterically wrong. No mind, I sometimes think that I could give my learners Kahoots on spot popping or nose picking or elbow greasing and they would probably enjoy them just as much, the competition being so much more important than the questions (of course).

They are important, too.

Of course there are many reasons other than fun why quizzes are important to me as an English teacher.  First and foremost, I am asking questions – I’m a big fan of the Socratic method.  Quizzes, particularly online quizzes, allow me to ask questions in a different way. Instead of asking a class and watching the sometimes desultory raising of hands, I’m doing the same thing in a more active way – plus I am asking all of the learners for the answer at the same time rather than just one.  True, most quizzes don’t allow you to probe if there is hesitation – it’s right or wrong. Yet more sophisticated quiz software such as Moodle can allow for this and if a question is answered incorrectly, then a similar question may be asked in a different way and the learner gets the opportunity to try again, effectively.  Real-time quizzes with a group don't do that.

Forget the more sophisticated software for a second and boiling it down to the basics, what I am really doing is asking my learners to retrieve information. You don’t get many points for that in the GCSE English exam, true enough, but this act of retrieval has been shown to help with the ability to learn in general.  When a learner retrieves information from that dusty corner of their mind this may lead to further learning and the bonus is it’s independent of the teacher.  There’s a furthermore too – simple retrieval exercises can even lead to learners applying the information in new circumstances (future lessons!) too.

Then there’s feedback. I'm sorry if all the blood drained from your face at the mention of the word, especially if you hear it from the mouth of someone who hasn't been inside a classroom in a small dog's lifetime, only just heard about its importance in a meeting and is now insisting that you do it 24 hours a day (including in your sleep) and mention it approximately 765 times in each scheme of learning you produce, even while they don't really understand what it truly means and is apparently ignorant of the fact that it always has been incorporated in good teaching and learning before it became the buzz word du jour.

Rant over. Now, I don’t use quiz results to measure progress for individuals on a regular basis but online quizzes are mighty useful in as much as they can tell me which questions are being answered correctly by most students and, likewise, which the majority are not getting right.  I have used this information in the past to shift focus or to refocus on skills that I had assumed the class had grasped.  Obviously, something hadn’t happened and I had blithely moved on, unaware that my staggeringly good teaching had had little impact. So, the students are giving me feedback rather than the other way around.

As I mentioned earlier, I rarely use quizzes to assess individual progress, but they can sometimes show when something is wrong – a disinclination to do a quiz or poor performance on one can indicate an underlying (usually domestic) issue that is bothering a learner – and this of course leads to very different questions.  I wouldn’t say that I use quizzes as a safeguarding tool per se, but they have had that unexpected secondary outcome on a number of occasions.

Of course, as an English teacher I get annoyed on many other occasions.  I am easily frustrated and bewildered by the lack of reading that my students do outside of college.  I teach predominantly male 16-18 year olds, so their very state of being apparently exacerbates the issue.  “Reluctant” is not the word when it comes to their inclination to read – they are often reading refuseniks.  And they don’t care that they don’t read! They are fully aware of the doors (metaphorical and otherwise) that reading can open but they are quite happy to live their lives with books, newspapers and textbooks (electronic or otherwise) firmly closed.  “I don’t really like reading, sir,” they merrily chime with a certain implicit pride and only the merest hint of apology – to themselves or to me. I know full well that they mean “I’ve never really bothered to read, and I have no plans to either - even if it would improve my ability to pass the exams. I'm quite pleased with that state of affairs too.”  I’m sure that if reading the first twenty pages of Pride and Prejudice triggered the best orgasm of their lives, they would change their tune but alas, no.

Instead, it is a truth universally acknowledged, that a young man in possession of a grade 3 must be in want of a resit or two.. 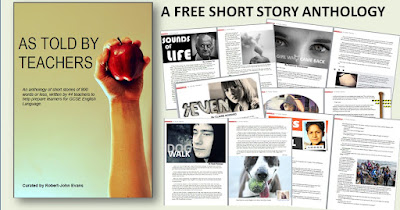 So, a few years ago, I put together, with the help of 42 other English teachers, an anthology of short stories called As Told by Teachers.  I will often use read one of these stories in class – after informing them that there will be a quiz about it after we had read it.  As such, what I get is rapt attention being paid to a piece of fiction that might otherwise have been half-heartedly semi-digested.  If my class was a meal, it turns from sprouts and cabbage to chicken and chips in an instant.

There’s a certain psychology behind this, of course.  Researchers long ago pointed out that when a test is expected then learners pay greater and closer attention to what will be tested.  If students expect a regular quiz, then performance is also enhanced so I try to do one in at least one of the two weekly English classes I get with a group.  I did a quick calculation last year and the quizzes I did based on the anthology mentioned above led to 10,000 words being read and (I hope) closely scrutinized by my learners.  I always smile inwardly when a student asks “Are we having a quiz today?” in anticipation of a positive response.  It makes reading for retrieving information an almost Pavlovian reflex.

I often do something really sneaky, too.  If I have done a quiz on a particular story or text one week, then I will focus on a paragraph or two from that text the week after, focusing on language or structure or the attitude of the writer - you name it.  The students have already read the text once, have answered questions about it and are much better prepared (and willing it seems) to respond in writing to elements contained within it than if I used a fresh text.  So, recycling works in English classes too!

It’s not just the teacher that benefits from quizzes – learners too can get a better idea about how well they understood or have been able to apply something.  I’ve seen quizzes motivate students to “go back to the drawing board” so that they can do better when the similar content comes up in a future quiz.  It allows learners to informally build up their awareness of their strengths and weaknesses – and many do act on this awareness.  Not that I can get my lot to translate these insights into meaningful targets, of course...

So awareness of subject can be heightened, I try to ensure that the quizzes I create are specific to assessment objectives (or their elements) in order to avoid a scattergun approach which isn’t really much good for anyone and relegates the quiz fully in to the “just for fun” category. So, for one text I will create a quiz around the language that is used, in another it will be the structure of the text - and so on. Random question quizzes can be fun but if I want to see how my learners are doing with a particular skill then I have to be very specific in the kind of questions I ask.  Common sense, I know, but the temptation is always there to splice in a question about language into a structure quiz – and that can lead to learners confusing the two when we get to exam response practice. 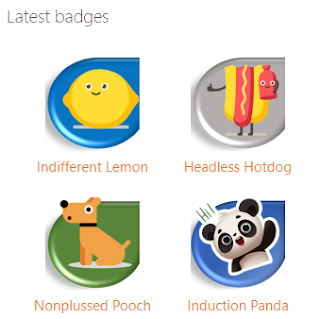 I guess this all leads me on to a plug for the VLE.  We have created a stack of quizzes on there – both for weekly collective challenges on Kahoot and for individual students to use on the site (mostly the latter).  These quizzes encourage students to attempt them more than once with feedback on each question.  They, too, demand some reading before they can be attempted and instead of getting a kit-kat as they might in class, learners get a silly badge – you can see some examples opposite.

Did I mention that quizzes are fun?