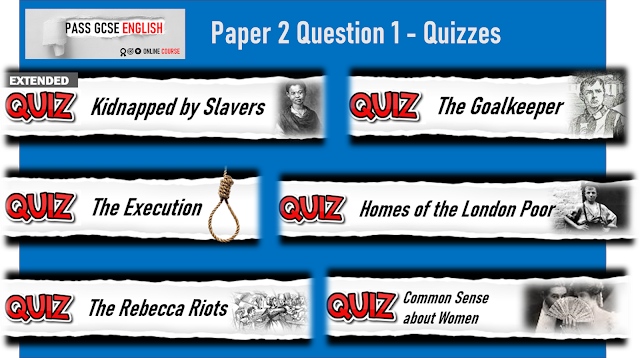 GCSE English Paper 2 Question 1 presents students with a text and they then have to select which four (out of eight) statements about it are true (or false, depending!). This may sound quite straightforward but as many English teachers will tell you, they have a number of students each year who do not get all of them correct – and then go on to miss a grade four by a single mark. So, although it is easy to underestimate the impact that a poor performance on this question may make to some learners. As it is only worth four marks, however, it is often overlooked in the pursuit of the “big hitters”. By that I mean the questions that are worth more marks. Our VLE (Virtual Learning Environment) aims to put that right with a series of quizzes that can be attempted a number of times. We have tried to make the subject matter as interesting as possible – so while learners can practice their skills on this question, they will also pick up a few thought-provoking history lessons too. History? What on earth does that have to do with GCSE English? Well, the texts that the students are examined on can date back as far as 1801. Overwhelmingly, the older texts have appeared on Paper 2. So, our aim is to provide some stimulating quizzes that offer a little cultural capital to boot. They give an insight in to how people lived and died in days gone by – and what they did between those two major events too! It also, by default, helps to develop reading skills by exposing learners to texts from a different day and age which they may have to focus on a little more than usual in order to understand their meaning. The quizzes (and the associated exam question) cover part of AO1 (Assessment Objective 1), specifically the ability to “identify and interpret explicit and implicit information and ideas”. You can sign up for the VLE using the one of the tabs above – depending on whether you are a student, teacher or private tutor.
at December 27, 2020
Email ThisBlogThis!Share to TwitterShare to FacebookShare to Pinterest
Labels: Assessment Objective 1, English Paper 2, GCSE English Language, paper 2 Question 1, Quizzes for GCSE English Language